Quick Info About This Location

Dingboche is a popular stop for trekkers and climbers headed to Mount Everest, Ama Dablam or Imja Tse. Parties will typically spend two nights in Dingboche for acclimatization purposes.

The village relies heavily on tourists with lodges and tenting areas comprising most of Dingboche. The Imja River flows directly east of the village.

A helicopter landing pad is located just west of the Imja River, near Moonlight Lodge. Dingboche is home to an Internet cafe (using satellite technology) and one of the world’s highest billiard parlors. 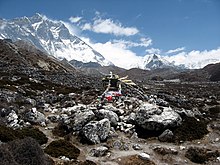 Stupa with Taboche in the background

One of the characteristics of Dingboche is the kilometers of stone walls, built using the stones of different sizes that cover the entire Valley of Imja. These stones are removed in order to plow the soil and end up being piled one over the other creating kilometers of walls.

Want to see your place featured?

Kathmandu Durbar Square (Basantapur Darbar Kshetra) is one of three Durbar (royal palace) Squares in the Kathmandu Valley in Nepal, all of which are @UNESCO #WorldHeritageSites.
https://nepaltourismhub.com/destination/kathmandu-durbar-square-basantapur/
#BasantapurDurbarSquare #Nepal #ExploreNepal #PromotingHiddenDestinations